Based on the positive feedback we’ve received about our May 2017 post on the data trends from our 2016 monthly citation lists, we have decided to post a set of visuals and commentary every January to detail the previous year’s trends. These info-graphics aim to categorize and communicate patterns found in PedPalASCNET’s Trends in Pediatric Palliative Care Citation Lists. We hope to inform the pediatric palliative research community about which journals are being published in most often; which authors are featured most often; the impact factors assigned to those publications; and the most commonly occurring themes based on the frequency of subject headings and keywords.

This year we had 370 publications spread across twelve lists (excluding our Developing World and Oncology Lists). These included journal articles, dissertations, conference publications, and editorials. From these 370 publications, the majority were published in 2017 (note the number in the library is slightly higher than the visual because of several duplicates existing in the library). 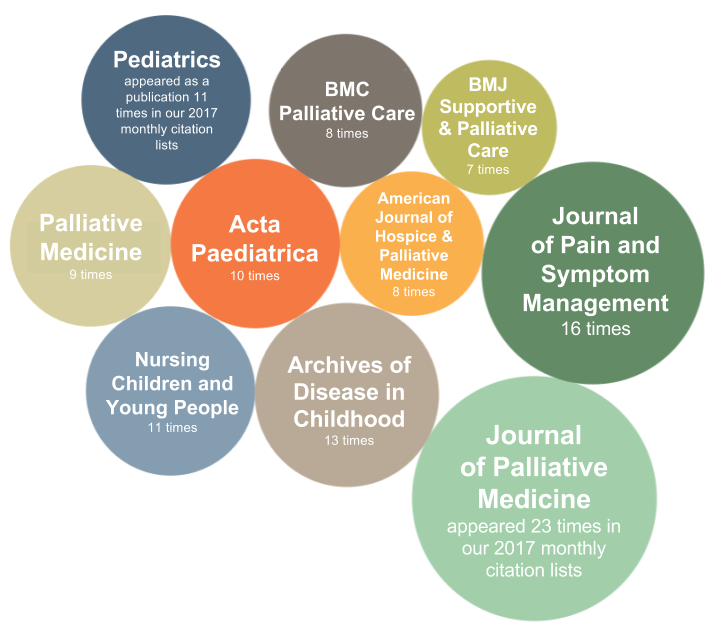 Roughly 75% of the articles (279 out of 370) we included had subject headings and/or keywords assigned to them by the National Library of Medicine or the publishing journal. We pulled this data to analyze which headings were most common (see below). The trend was similar to what we found for 2016: palliative care, palliative therapy, and pediatrics were the most popular terms, but further down the list we found several noteworthy headings associated with a number of excellent studies. For example, quality of life (26 results), bereavement (22 results), decision making (26 results), communication (20 results), and grief (15 results) are five terms which reoccurred frequently throughout our lists and are among the top 15 most common. We also found 8 results relating to ethics and 10 results addressing psychology. We excluded terms for population group (child, human, female, infant, etc.) from this visual, and we only included terms which occurred 8 or more times throughout the year.

Most commonly featured authors from our 2017 citation lists were taken from a total of 1,360 different authors and co-authors. Of this total, fourteen authors appeared 5 or more times (visualized below). Joanne Wolfe appeared most often with 15 publications listing her as an author or co-author. 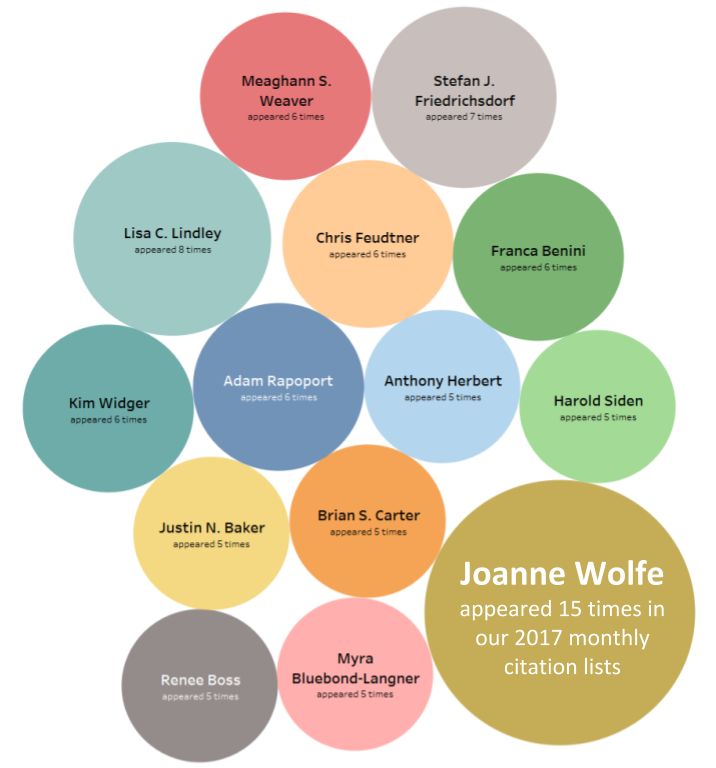